This is Part II of a 5 part series “5 Bogus Coaching Cliches (and better alternatives).  Click here for Part I.

If that were true, there would be no such thing as obesity, smoking, or forgetting. Do you really think a smoker continues to smoke because living to see his grandchildren isn’t important? As my friend Ana says “Come on, people!”

There’s something more subversive at work here. When we behave contrary to true values, we are suffering from resistance.   This resistance can be powerful enough to sabotage our most important goals.  Resistance typically has its roots way back in our history.   Some time long ago, your mind created an association of danger with the thing you’re resisting.   It doesn’t have to be rational in order to derail you.  This explains the survey which ranked “public speaking” ahead of “death” as people’s #1 fear.

It is  essential not to criticize this resistance as ‘stupid’ or ‘illogical’.  After all, this resistance thinks it’s trying to protect you.  By asserting  you’re simply not making the goal an important enough priority, this cliche leads you right into the resistance cycle:

Lets say your resistance manifests in procrastination. Here’s how the cycle would work: 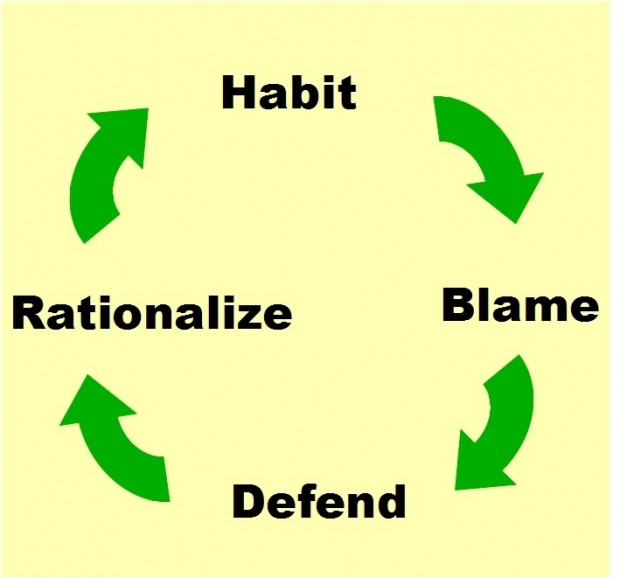 Habit: Putting off doing your taxes

Blame: “If it was really important I would do it, so I’m just not trying hard enough”

Defend: Since you are being falsely accused in the blame step, your natural reaction is to get defensive, and the best way to defend ourselves is to rationalize.

Rationalize: Part of you knows the procrastination isn’t coming from your true self, so it has to make up some other logical reason: ” I can’t even start on my taxes until the laundry is done”

Habit: We are so good at coming up with believable rationalizations, that we justify more of the habit.  “… and until the kitchen is clean, and shirts ironed…”

There’s got to be a better way…and there is!  Next time you’re doing something you don’t want to do ask yourself:

What is the payback?

Write down as many beneficial side-effects of  procrastinating, no matter how small or irrational it seems.  For example:

Next to each, rate how true it FEELS to you (not how true it logically is), then tap for each payback, one at a time. Once you’ve reduced each of these to close to zero, see if any more come to mind, then follow the process for those too.

I want to hear from you!  What is a priority that you’re not giving the attention it deserves?   How did your tapping go?   Leave comments below!

It was very effective. I am getting back into the dating world after almost 2 years.
— RB, Entrepreneur

"[the workshop] delivered the material very well and provided high value for the money spent"
— YS, Engineer and Mom

Vera is amazing!!! She helped me with my insomnia. I was skeptical at first but her energy and her sensitiveness to my needs and fears made it so easy for me. I highly recommend her."
— TM, Corporate Travel Specialist